Next steps for ‘Boots Corner’ to be discussed 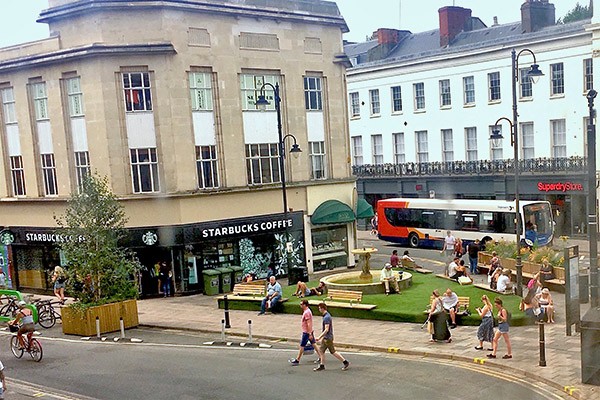 Phase 4 of the Cheltenham Transport Plan – ‘Boots Corner’ – will be discussed when Cheltenham’s cabinet meet on 5 November.  Members will consider the officer recommendation that the trial is made permanent.

If cabinet approves the proposal, the borough council will present cabinet’s recommendation to the county council’s traffic regulation committee for their consideration on 11 December. After that, the county council’s cabinet will consider the traffic regulation committee’s recommendation and make the final decision, either to end the phase 4 amended trial or make it permanent at their meeting on 17 December.

When discussing whether to proceed with the recommendation, Cheltenham’s cabinet will consider a range of evidence, which includes:

·         A reported overall decline in traffic movements since 2008, currently reported as a 13% decrease by the county council

·         Analysis of Bluetooth journey time data showing journey times along key routes in Cheltenham have remained, for the most part, unchanged since the implementation of the trial closure

·         Independent research undertaken to analyse pedestrian and cyclist activity at Boots Corner. Taking an average of all the surveys carried out since the traffic trial started, data shows:

·         2019 independent resident satisfaction survey undertaken by BMG research showing that walking, cycling and public transport is within the top 3 priorities for residents

Evidence also shows that people are changing their travel patterns and behaviours and in addition, the council is also considering wider implications, including:

·         Independent research from commercial specialists, Avison Young, stating that the percentage of Cheltenham’s vacant retail units stands at only 8%, against a national average of 12%, showing that the town continues to draw in investment

·         The increase of footfall at the Brewery Quarter of 12.9%; it is now 91% let, (100% on first floor level), their highest ever occupancy rate.  They also have an offer on a unit that has remained vacant since the Brewery Quarter was built in 2006; a strong indication of how well it is performing

The cabinet report will also include reference to the parts of the town where traffic has increased. There are three sites showing traffic increases above the 20% threshold; these are St George’s Street, St James’ Square and Winchcombe Street (South). This has not been unexpected, as these areas are on northbound routes immediately either side of the restricted route. Options to consider and address the increases in traffic along immediate alternative routes are being investigated.

If the decision is to make the trial permanent, access through Boots Corner will continue as priority for pedestrians, cyclists and public transport (enabling Sat Nav operators to update their systems). Temporary features will be replaced or remodelled, with the wider design yet to be decided. However, designs will take into account overall public opinion about the space, including access, seating and planting, pedestrian and cyclist habits and the requirement for a pelican crossing.

Focus will then turn to a range of ambitions for the town centre, as seen in the fly-through animation which has so far received 10,000 views.

If the decision is taken to end the trial and not make it permanent, the restrictions through Boots Corner will be removed and it will likely see the return of 10,000 vehicles passing through the space per day and potential reduction of footfall and public space use. The borough council will carry on with its work across the town centre, to continue to attract investment and further enhance the space for cyclists and pedestrians, supporting the climate change agenda and resident feedback in the recent independent survey (which will be discussed by cabinet and published in December).

Whichever way the decision goes, the high street will continue to benefit from upgrading work and further consultation with accessibility groups will mean that the town centre is the best it can be for everyone living in and visiting Cheltenham.

Councillor Andrew McKinlay, cabinet member for development and safety: ‘’Since the trial began in June 2018, the town centre has seen a significant increase in pedestrians and cyclists. What we are seeing here is a change in behaviour which not only makes for a safe, successful and enjoyable town centre, but also supports our ambition of making Cheltenham carbon neutral by 2030. We have worked with businesses and communities along the way and adapted the trial to reflect feedback, for example with further road adaptations and increased disabled bays.

‘’Our on-going high street revitalisation initiatives are making an impact in different ways; not only are we welcoming top brands and seeing huge multi-million pound developments for example at Cineworld, there also continues to be investment in town centre office space with for instance, the arrival of SLG and Hub 8. Our restaurants, cafes and bars continue to benefit throughout the day and during our Purple Flag, award winning night time economy.

‘’Overall, even though there are some pinch points, data shows that overall traffic volumes across the town have decreased and continue to fall. This pattern is likely to continue as people make their own changes to support climate change and as home working continues to rise. In addition, the A4019 corridor and some associated feeder routes such as St George’s Street remain a challenge but one that will be improved in 2020 by GCC and their commitment to a traffic light improvement scheme along this corridor.’’

Partner agencies have applauded the trial, including Sustrans, the national charity dedicated to making it easier for people to walk and cycle.

Upon noting the increased walking and cycling recorded at Boots Corner, Tom Beasley from Active Gloucestershire - a charity whose vision is that ‘everyone in Gloucestershire is active every day’ – said:  “Across the UK, half of women and a third of men are damaging their health through physical inactivity. By turning our towns into places that make being active an easy choice, we can improve public health and help people to stay active later in life.’’