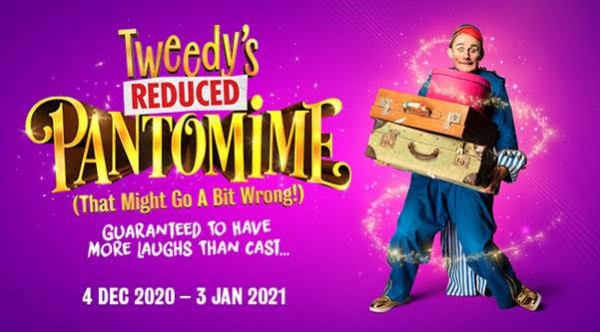 Christmas is not cancelled in Cheltenham as the historic Everyman Theatre announced not one, but two, socially distanced performances to delight audiences during the festive season.

The Everyman Theatre, will stage a limited capacity version of its annual holiday extravaganza when Tweedy’s “Reduced” Pantomime (That Might Go A Bit Wrong!,), from writer and co-directors Samuel Holmes and Nick Winston, takes the stage from the 4th of December. Adding to the festivities this year will be a production of Charles Dickens’ classic A Christmas Carol, opening on December 19th, produced by the Everyman Theatre in association with Box Tale Soup.

Mark Goucher, Chief Executive of the Everyman Theatre stated “We are all devastated by the effects of the pandemic on our industry but we’re hoping to bring a little cheer to everyone this season. The staff of the theatre and our incredible creative team have been working very hard to make sure the venue and our productions are as safe as possible. We hope that our efforts and shows, including a pantomime written specially for this unprecedented year, will be supported by audiences who feel safe and confident in the environment we create for them.”

The two productions will alternate performances in the historic theatre’s main auditorium and will be produced with full social distancing protocols in place. The Everyman Theatre has introduced extensive measures to provide the safest, most comfortable environment for guests. Measures include, hand sanitising stations positioned throughout the building, temperature checks upon arrival, and online ordering and delivery options for food and beverage service.

The most critical safety precaution introduced by the theatre has been a Health and Safety audit conducted by R&B Health & Safety Solutions. Plans implemented following the audit include a reconfigured seating layout in the Everyman Theatre which removes several rows and severely reduces seating capacity (from 680 to 350 seats) to allow for safer distances between audience members. Seating for all socially distanced productions, including the “Reduced” Pantomime, will be “pod” based allowing audience members to choose pods of 2, 3, 4, 5 or 6 guests.

Written and directed by the award winning team of Samuel Holmes and Nick Winston, Tweedy’s “Reduced” Pantomime (That Might Go A Bit Wrong!) will feature the return of Gloucestershire’s favourite clown for some pandemic pandemonium. Also starring Kane Verrall (Dandini) and Kevin Brewis (Ugly Sister) from Cinderella the show will run from 4th December 2020 – 3 January 2021.

Audiences will be able to experience all their favourite pantomime moments in one hilariously reduced production. Will Tweedy take on King Rat, conquer the Evil Queen, outsmart Abanazar or cut the giant down to size? Find out in Tweedy’s Reduced Pantomime - Guaranteed to have more laughs than cast!

A Christmas Carol will be presented in association with frequent Everyman Theatre collaborators Box Tale Soup. The family focused adaptation of Dickens’ classic tale will feature remarkable puppetry and all new original music and run on the main stage from the 19th – 31st of December.

Tickets for both performances are on sale now via the Everyman Theatre Box Office on 01242 572573 or everymantheatre.org.uk.

The Everyman Theatre is also planning a new season of socially distanced productions including comedy events, dramas and musicals in the coming weeks. Further announcements on the new season will be revealed shortly.