Tozer expecting team to thrive in League One challenge 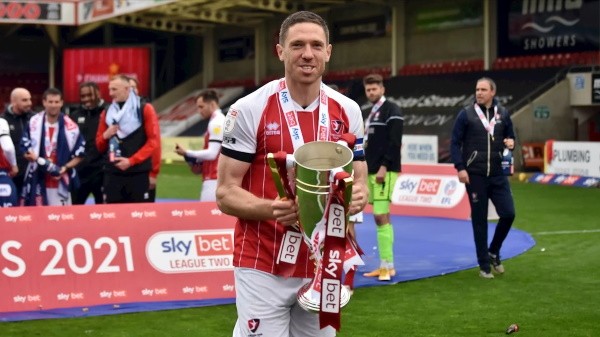 The challenge of Cheltenham Town playing in League One is one that captain Ben Tozer is expecting his side to flourish in.

Having played a leading role in the club's League Two title victory at the end of the 2020/21 season, Tozer is revved up for being the man to lead the Robins into the third tier for the first time at the Jonny-Rocks Stadium since 2009.

It's a level he's played at before, briefly for Colchester United, and at the start of his career for Swindon Town, and the opportunity to take on the likes of Sheffield Wednesday, Sunderland and Charlton Athletic as fellow competitors is a welcome one.

"It is going to be a great challenge for us but I think it's one we will thrive in," he said. "I think it is going to suit us more.

"The teams and everything else are going to be a lot tougher, but I think the way that we approach games it will suit us."

Tonight he is expected to play an hour as the pre-season fixture list sees Cheltenham make the short trip to Evesham United. Kick-off is at 7.30pm at the Spiers & Hartwell Jubilee Stadium.

He's been pleased with how pre-season has progressed so far and knows that the group he's a part of are already well up to speed and looking forward to the opportunity to drive the club on once again this coming term.

"There's a lot of outside noise already but that doesn't really affect us and I don't see it affecting us moving forward," he added.

"Everything is positive and we need to carry that on and ride that wave while we're there because there are going to be ups and downs next season, so we might as well stay as positive as we can for as long as we can.

"If we had the squad depth I would be comfortable with the team that we're going into the season with.


"We've got a great nucleus of players from last season, we work hard with each other, so there's nothing to worry about."

Get behind Cheltenham in the 2021/22 League One campaign with a new season tickets which are on sale now online and from the ticket office at the Jonny-Rocks Stadium.