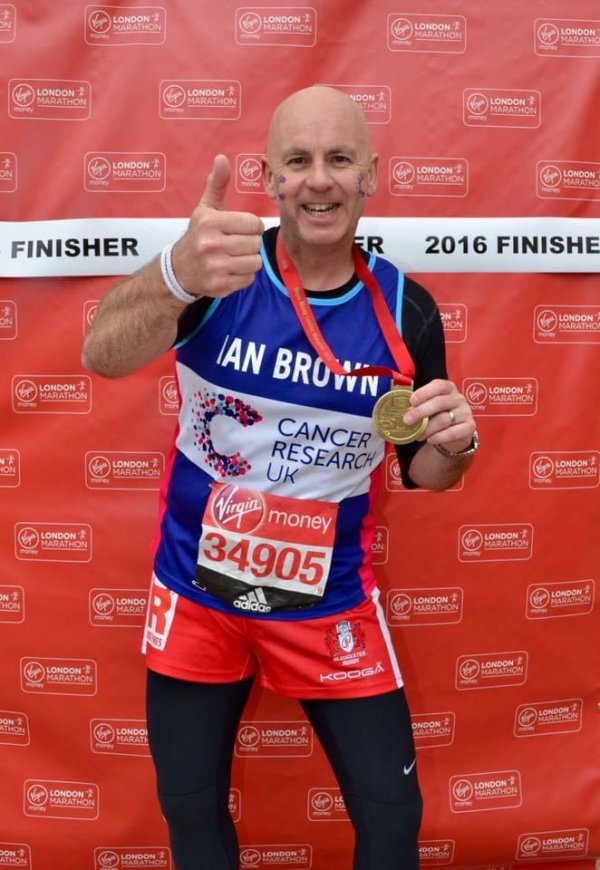 A 32 year old man from Gloucester has pledged to run this year’s Still Moving Cheltenham Half marathon in memory of his much-loved dad, who died from cancer last year.

James Brown, from Longlevens in the city, will take on his first ever half marathon in tribute to his father, who following aggressive cancer treatment leaving him with one lung, completed the London Marathon amongst many other running challenges, raising over £60,000 for cancer charities.

James, who will be running to raise funds for Sue Ryder Leckhampton Court Hospice who cared for his dad, said, “No one will ever fill the shoes of my dad. He has very big shoes to fill! He was an inspiration to so many. He was pretty incredible and he had quite the following. I want his inspiration to live on.”

“Dad always used to remind everyone you can do anything. I never thought in a million years I would be able to run, but here I am training for my first half marathon.”

James’ dad, Ian Brown, was diagnosed with cancer in 2014 and told he had six months to live.

Following surgery to remove his right lung and against all medical advice in January 2015 Ian started running to enhance his fitness and raise money for cancer charities. During this time he took on half marathons, including the Cheltenham Half, full marathons, colour runs, relay challenges and park runs.

James adds, “We went to London when Dad ran the Marathon and I can’t explain the scenes down there. It was packed and it was so emotional. We were all so nervous for him. In the end we probably walked further than he ran trying to get around the route to make sure we could cheer him on at different points.”

Ian’s incredible fundraising saw him win the Pride of Britain West Country, Regional fundraiser of the year award in 2018.

James shares, “Dad always used to tell people I’m not dying with cancer I am living with cancer. And through all the incredible things he achieved over six years following his diagnosis, he proved that.”

Inspired by his dad, James decided to lace up his own trainers. “My ambition was to run with dad, so this time last year I decided I needed to sort myself out and I started the NHS Couch to 5k Challenge. Dad was quite impressed I had taken running up. He always used to comment on my Facebook running posts saying ‘Go on, kid!’

“Slowly over nine weeks of training I built myself up to run a 5k then longer distances. I lost two stone and then ran 10k, but unfortunately dad was not well enough for us to run an event together.”

“Before I took up running, I remember looking at dad and wondering ‘what do you enjoy out of running?’ but now I know. They say you get the running bug, and I’ve got it. Now, if I don’t run for two days I don’t feel myself.”

James hopes to raise £500 for Sue Ryder with his Cheltenham Half Marathon run. “Dad did so much for charity so I wanted to raise funds with my running too,” said James. “I wanted to support a charity which supported dad towards the end. Sue Ryder Leckhampton Court Hospice means a lot to me and my whole family as they were there for us and dad when we needed them.”

In the summer of 2020, James’ dad’s health deteriorated. “We knew he needed specialist end of life care,” shared James. “And Sue Ryder Leckhampton Court Hospice at Home team commenced dad's palliative care coming over to his home at least twice a day, not only supporting him but the whole family too. All of the Sue Ryder Nurses were amazing.”

“On the 16th August 2020 dad’s health deteriorated further and he was admitted to Sue Ryder Leckhampton Court Hospice’s inpatient unit, so he could be cared for properly around the clock. It the midst of a global pandemic we were unable to visit, but the amazing staff were at the end of the phone so we could get updates as often as we liked.”

“Everyone there was so kind, compassionate and caring. They understood the awful situation we were in and the fact that we could not go in to see him. Dad has five kids and they told us ‘you can all speak to us’ and that we could ring in as many times as we wanted. And there was always someone at the end of the phone.”

“Knowing dad was being looked after in a safe, Covid-secure place with the professional help that he needed gave us such peace of mind. At the most horrific time in our lives, we knew dad was in the right place.

“Sadly just two days after being admitted to the hospice dad passed away leaving behind his wife Emma, his three grown up sons, myself, Tim and Joe, along with his 9-year old twins, Freddy and Lily May. We all miss him terribly.”

“Dad was an incredible man and he showed a lot of people, including us, that you can do anything. His consultant said to him ‘you’ll never be able to run for long distances. Your body just won’t take it.’ He was one of those people that if someone told him you can't do it, he'd do it.”

It's an approach to life that's become a mantra for James, who set up his own event hire business hiring hot tubs, bell tents and silent disco equipment in 2018. “When I first started my business, people said ‘you can’t do that, it won’t work’, but we’re thriving. Even through this pandemic we’ve kept going and we’re really busy. We’ve found a way to support Sue Ryder too, through donating £5 for each hot tub hire to the hospice with matched funding from our customers if they want to support this amazing local cause.”

James hopes his dad’s story will inspire others into taking up a challenge to get fit and help others. “Dad’s favourite saying was 'living the dream’ and he called one of his charity running teams ‘Living the Dream’. We're using the same team name for our running fundraising challenges in his memory. My brothers, Joe & Tim, have already signed up to run the Cheltenham Half too, and we’re inviting anyone who knew dad to sign up and run with us.”

“Anything you can do to help others goes a long way in times like these.” 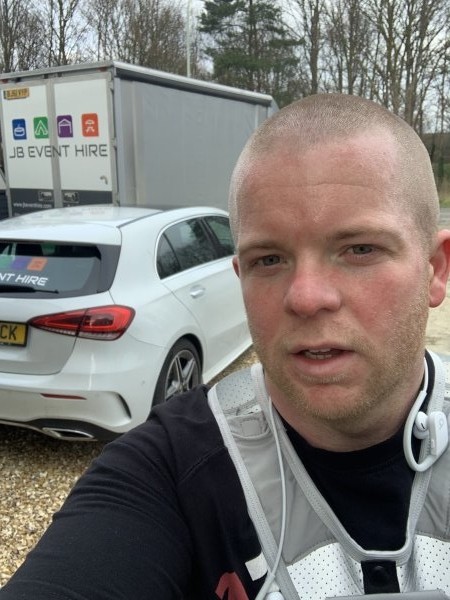