A memorial service to commemorate the 75th anniversary of the liberation of Auschwitz-Birkenau has been held by Gloucestershire County Council.

Leaders of the council’s political groups joined together to show their commitment to combating anti-semitism in all forms.

On Monday 27 January staff and councillors attended a short memorial service at Shire Hall to remember all the victims of the Holocaust and other genocides that have taken place throughout the world.

County councillor Colin Hay led the service by sharing his experience at Srebrenica, which was the site of a massacre during the Bosnian War, while Sue Naydorf, from the Three Counties Liberal Judaism Group, gave a short reading and lit a candle.

The service ended with a minute’s silence.

Cllr Hawthorne said: “This year’s theme is Stand Together and explores how genocidal regimes throughout history have deliberately fractured societies by marginalising certain groups, and how these tactics can be challenged by individuals standing together with their neighbours, and speaking out against oppression.” 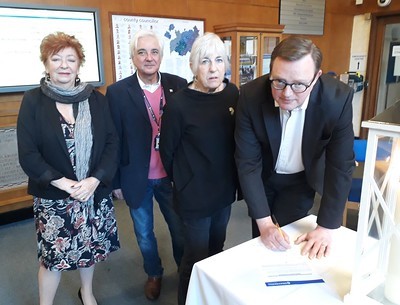