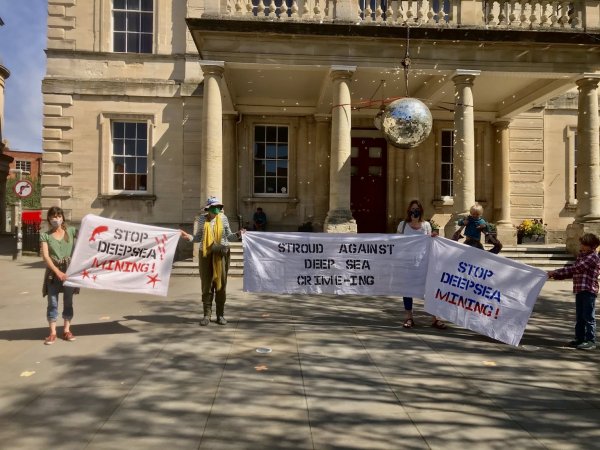 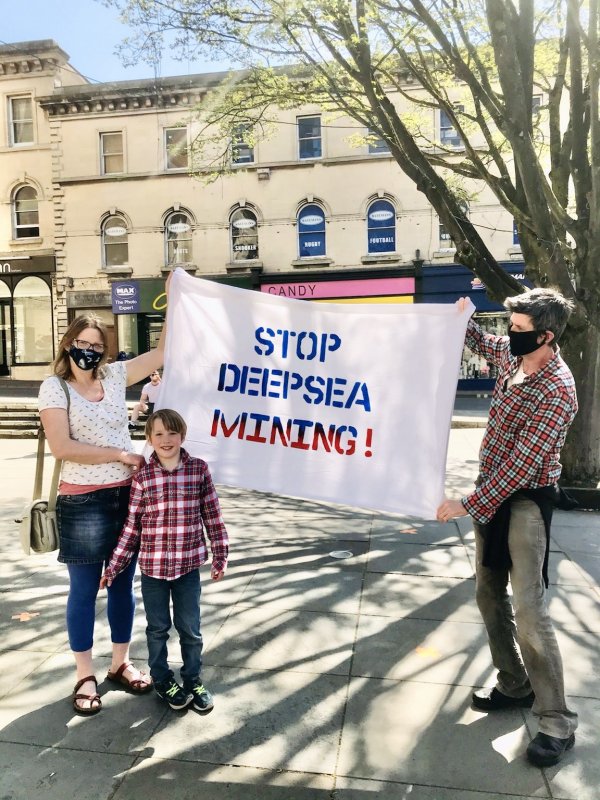 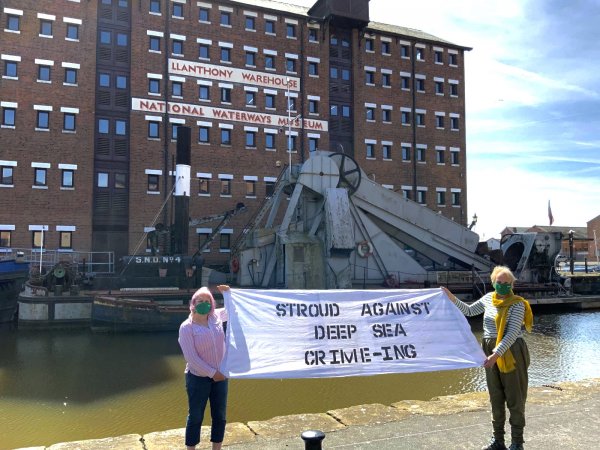 Over the weekend of 24th-25th April, volunteers from Greenpeace Stroud Group took part in a nationwide protest calling for the UK Government to ensure our oceans are off-limits to deep sea mining. Volunteers photographed home made banners at The Subscription Rooms, Gloucester Docks and Sharpness among other locations. These images, along with hundreds of others from across the country, will be sent directly to Government to make it clear that people across the UK do not support plans to rip up the ocean floor for profit.
Sally Hilliard volunteer from Stroud said ‘On Saturday, I joined volunteers from Greenpeace Stroud Group to take photos with our banner reading [Stroud against deep sea crime-ing] outside the Subscription Rooms.’
‘The deep sea might seem a world away from Stroud, but in the year that the UK hosts the UN climate negotiations, we have a chance to prevent the needless destruction of our oceans. We’re sending a message to the UK Government that they need to take ocean protection seriously, and end their support for deep sea mining.’

This nationwide banner protest is the latest step in the campaign to protect our oceans. Earlier this month, Stroud Group hosted online screenings of Greenpeace’s docu-series Ocean Witness, and hundreds of people tweeted the Foreign Office Minister Zac Goldsmith about the need for a strong Global Ocean Treaty. Greenpeace activists also recently held protests around the world, in the Pacific Ocean they displayed a banner in front of a ship chartered by DeepGreen, one of the companies spearheading the drive to mine this precious ecosystem. Volunteers simultaneously carried out a peaceful protest in San Diego, USA, targeting a ship chartered by Belgian company Global Sea Mineral Resources (GSR). Then on 22nd April, activists again targeted GSR as they conducted deep sea mining tests, writing RISK in approximately 2 metre high letters across the side of the ship. During these tests, Greenpeace documented large patches of sediment rising to the surface, indicating significant disturbance to the sea bed.

Deep sea mining would involve sending huge industrial machinery to the fragile ecosystems in the depths of the oceans, many of which are less well understood than the surface of Mars. It would undermine the livelihoods of many people in Pacific Island communities, by threatening fish stocks, and risks disturbing carbon storage in the deep ocean. We need to protect at least 30% of our oceans by 2030, and make sure governments urgently agree to a Global Ocean Treaty that can create a global network of ocean sanctuaries where marine life can thrive.

The Government’s review into deep sea mining will conclude in July. Despite the UK being a major player in this area, little is known about this murky industry. One of the three largest corporations who work on deep sea mining is UK Seabed Resources Ltd, a subsidiary of US weapons giant Lockheed Martin.
Instead of allowing the exploitation of our oceans, or unsustainable land-based mineral extraction, governments need to prioritize resource efficiency, and a transition to a circular economy, whereby resource usage is reduced and metals already in circulation are reused and recycled.

Sally Hilliard continued ‘Rather than a handful of companies exploiting the deep sea for profit, we need to prioritize reusing resources and moving to a sustainable, circular economy. I don’t want the phone I use, the battery in my electric car, or the chips in my computer to be there as a result of damage to such a precious and beautiful ecosystem.’

Join us at our next Group meeting to hear more about our Protect the Oceans campaign, and how you can get involved.

Notes:
The Greenpeace activities across the UK over the weekend were all conducted according to social distancing rules, and all the necessary COVID safety measures have been taken by our volunteers.