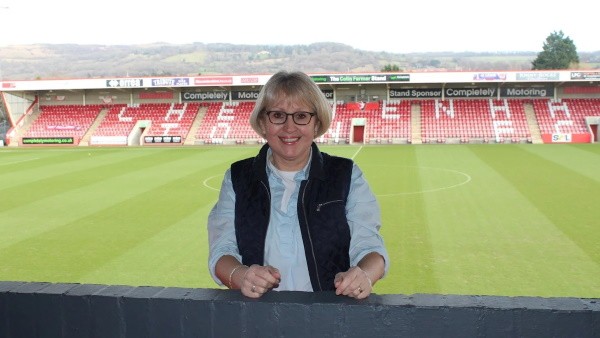 Jenny Hancock has come onboard as the new Supporters Liaison Officer at Cheltenham Town during the 2020/21 season.

Her role sees her act as a link between the club and the supporters at the Jonny-Rocks Stadium to help add further improvements to the matchday experience and relationship for both home and away fans.

A supporter for 13 years, Jenny has a season ticket in the Paddock and has already been undertaking the role during the current season, albeit digitally because of the restrictions on fans attending matches because of coronavirus.

When supporters return to watch games again at the club they can expect a warm welcome from Jenny who will be doing her bit to add to a welcoming matchday atmosphere at the Jonny-Rocks Stadium.

Discussing her role Jenny said: "Once we can get back into the ground I hope to be able to meet and engage with as many supporters as possible from all corners of the stadium. Helping to make the matchday experience enjoyable for everyone is as important to The Club as it is to the fans.

"I will liaise with away supporters when they are visiting Cheltenham so they have a smooth passage when they come here and have all of the information that they need, as well as getting information to our supporters who are going to away matches that will be useful to them."

Growing up as the daughter of a football mad dad who both refereed and ran a Sunday League club, Jenny began watching live football with her husband while supporting a friend who was involved with operations at Hereford United.

After attending a fixture between Cheltenham and Hereford in the away end at Whaddon Road it sparked a relationship to attend as home supporters with the Robins that is as strong as ever 13 years on.

Jenny added: "We spent ages sitting in different parts of the ground in the first season and deciding where we wanted to be. We ended up being in the Paddock and that's where we are now.

"We are season ticket holders and we've met a really nice group of people that we'd never met before in our lives. We've got a WhatsApp group going with them because we can't meet with them on a Saturday or go to the pub with them after a match now so it's a really nice friendly community."

Although you can't see Jenny at the stadium on matchdays at the moment she is contactable on email via this address: slo@ctfc.com

Jenny will also be featured in all match programmes for home matches moving forward.