See all listings from Crime in Cheltenham

Crime in Cheltenham: How to stay safe

How much do you know about crime in Cheltenham? The highest type of crime in Cheltenham is anti-social behaviour with 1214 incidents happening between May 2018 and April 2019. Another big problem in the area increasingly is Bike Theft with 168 incidents, Shoplifting 368 and Burglary 133.

According to the Office of National Statistics (ONS) nationally, there has been no significant change to crime levels this year compared to previous years where there was a decrease in crime. Noticeably, there has been a rise in theft and increases in offences involving sharp instruments. Knife and offensive weapon offences reach the highest level for a decade with an increase of 34% from 2015.

How accessible is it to find out about crime in your area? With so much information on crime, it's difficult to figure out what local crime levels are, as often the content is confusing. It may be that it is not clear where people can look to find crime levels or what resources are available. For finding out about crime rates in your area, you can use Crime Statistics to put in your postcode and get figures based on the main crime categories.

There is a lso the Neighbourhood Watch where it will give the opportunity to find out about what's going on in the area, but also feel like you can make a difference to the community.

Crime levels in Cheltenham between May 2018 and April 2019 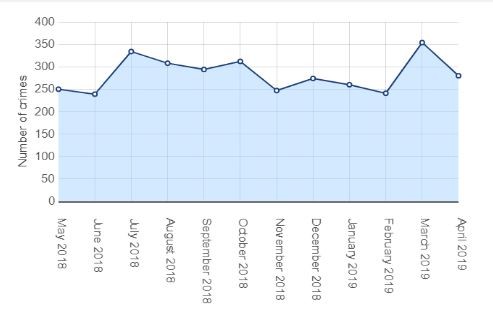 The Office of National Statistics (ONS) has gathered a guide from several government sources on crime to provide people with easier access to information. It has questions and categories of crime that people may query about crime issues, it is a concise page to answer any concerns.

Colin Pilsworth, Cheltenham Safe Co-ordinator said: “Sometimes the fear of crime is out of proportion to the actual  reality. So you read the papers and things and obviously, it's so sort of full of bad news but actually Cheltenham is a very safe place.”

Cheltenham Safe is a business crime reduction scheme. They work to reduce retail crime and crimes of violence through two schemes Cheltenham Day Safe aimed at mainly daytime retail businesses and Night Safe which is for late night bars, clubs and food establishments.

He does feel more could be done to help crime with more needing to be done to improve it: “I do think we are missing sort of a visible presence on the streets. I'm not naive enough to think that people go out and see a police officer walking around that it's necessarily going to stop crime happening. But, we have a lot of issues here in town. So I think we are suffering from all the austerity measures and cutbacks and staffing levels of the police and it does impact on things.”

Colin highlights that there are plenty of resources available to people if they are worried about what to do or want advice: “They can ring the police directly, or they can speak to speak to Crime Stoppers anonymously, so you don't need to actually pass your details as if it's somebody you know, it's a bit tricky.” 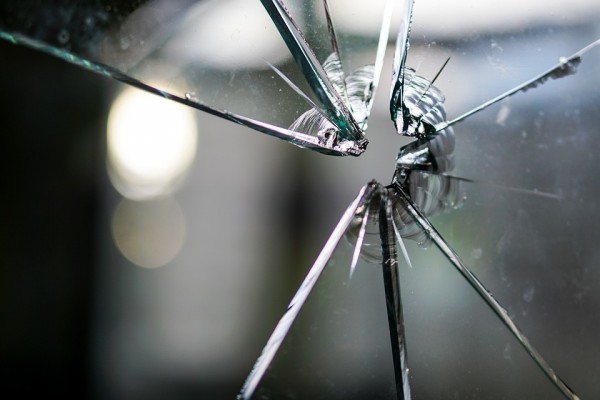 The biggest crimes in Cheltenham are Burglary, Cycle Theft and Shoplifting. There are lots of measures to take to make sure you reduce your chances of being affected by these crimes. So, what can you do to keep yourself safe?

It's useful to know that to help people stay safe that if you need to call the police and you can’t talk during a 999 call, dialling 55 should route your call to the police. There is also a personal safety app called Hollie Guard where if you’re in danger with a tap of a button it will send your location along with video or audio evidence to your designated contacts that you have put in.

In regards to burglary, it’s surprising how many people still leave a key under a mat when you can buy a key box for as little as fifteen pounds. You can also buy them from your local police station, locally for Cheltenham, Hester’s Way police station is open to the public.

In relation to bike theft, make sure you get a lock which can easily be bought from a supermarket, there is no need to spend loads. You can sign up to The National Cycle Database to get your bike marked. The police also regularly have Bike Mark Events where you can get security bike advice and they will mark it or mark kits are reasonably priced for around twenty pounds so it's worth doing. 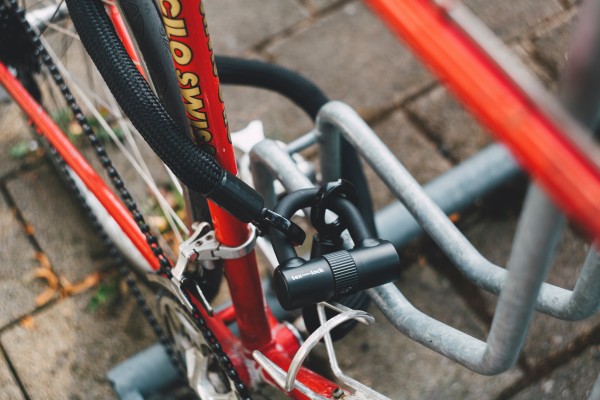 Gloucestershire and Wiltshire Regional Manager of Crimestoppers, Emily van der Lely, feels that the area is safe to live, it's the basic prevention techniques that help prevent crimes such as bike theft and burglary being committed: “I don't believe that Cheltenham is any different to anywhere else. So I don't feel that anyone needs to be particularly concerned. I would suggest that people are vigilant in locking up their homes correctly, making sure that they let a neighbour know if they're going away and don't leave windows open. It's actually the most obvious things that people forget to do.”

“The biggest issues I would say is is focusing on what people can do in relation to burglary. People just don't lock their doors. They really target areas, you've got to think of a burglar as that's there full time job so they'll go around and assess it straight at the time. So, encouraging people as it's the simple things so don't leave your bin by the back gate because people will hop over the gate. Don't leave your bathroom window open because it's surprising how neighbours assume that it's okay.”

“It’s really simple stuff. If you've got a really good bike, and you've got a bike rack on the back of your car, lock it up. So many people will go to a garage with a bike on the back, come out and there bike is gone because they haven't locked the bike. Put your recycling away properly. You know, to announce that you have a new TV is not a good idea.  You say it to people and there like yeah course but people don't always do it.”

What can people do to make a difference?

Crimestoppers is a national charity who provide an anonymous Reporting Service. So anyone who's got information on crime has the opportunity to come forward by phone or online with the reassurance that the information they give is anonymous. Crimestoppers take out anything that could reveal a person's identification. They work in partnership with the police but are an additional service so if you don't want to go to the police then go to crimestoppers.

An important tool people can get is Community Alerts which is through the police and free to sign up for. The way it works is if for example a burglary happens in your area, and you've signed up to receive messaging for the area. It will provide updates and tell you if there was a burglary last night and be aware. It will also ask if you saw anything and tell you the main information.

Crime in Cheltenham is fairly low but its still important to keep safe and to be aware of how to help prevent it.

See all listings from Crime in Cheltenham