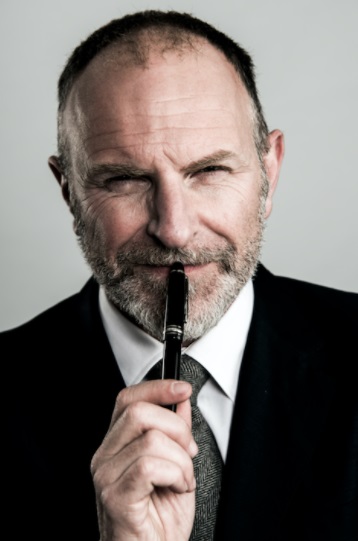 Simon Evans is no stranger to Cheltenham. Quite apart from previous appearances at the Town Hall, he chose the town as the setting for his stag do, some 15 years ago.

“My best man and I discussed what kind of activity we’d do during the day and we decided on archery, and ended up doing it in the middle of Cheltenham racecourse,” he told me. “I wasn’t very good, but the town is lovely. We stayed in a nice Georgian spa hotel.”

One gets the feeling that perhaps Simon was born in the wrong era. One can imagine him yearning to be back in ancient times in rhetoric with the great thinkers of the age. Perhaps with Cicero, debating in the Roman Senate, or discussing the nature of the universe with the great Greek thinker, Heraclitus.

It is a constant source of dismay to him that that kind of expression seems no longer open to the politicians of the 21st century, and he is doubtful that the likes of Teresa May, with her 2:2 degree in geography, and Jeremy Corbyn, who failed even to complete his course at a London polytechnic, are the right people to run the country.

Indeed, part of his new show, Genius, that comes to Cheltenham in March, looks at the idea of how being intelligent and articulate is not valued these days.

“I talk about how it’s fallen out of favour and is almost a sign that you’re lacking in empathy. I’m in favour of rigorous conversation, free speech, clarity of thought which you can only have when you’re allowed to open your mouth and start talking.

“There’s been a collapse in the quality of debate; a toxic feedback loop where you get a bigger audience if you pitch things at a lower level, and the audience are subjected to that crap and become idiots.”

He believes politicians nowadays are trained to stick to the script, no matter what, because of the danger that if they go off-piste a little, they might reveal their true feelings.

“It makes programmes like Question Time completely pointless because they are just going over this same thing. Back in the ‘70s there was Robin Day hosting an election night special with Dennis Healy, Jim Prior and Enoch Powell in the studio and it’s like watching the Roman Senate by comparison.

“These people were able to speak, be interrupted, pause and consider the point that’s been made to them and respond in a subtle and flexible manner. But that’s now a completely alien culture, it’s just gone.”

A law graduate, Simon admits he never had any intention of going into the profession after university, but it was 10 years before he began in stand-up. Since then, he’s developed the reputation as a bit of an old buffer, with what he calls “an Edwardian point of view rather than a contemporary one,” but adds: “I can’t complain, it’s done me very well.

“I think I’ve always been a bit of a grumpy old man. Comedian Dave Gorman once said: “Simon Evans has always been 50 years old at heart, and the fact that now he is actually 50 means that he’s finally grown into himself”.

Interview taken and written by Helen Gadd on behalf of www.glos.info