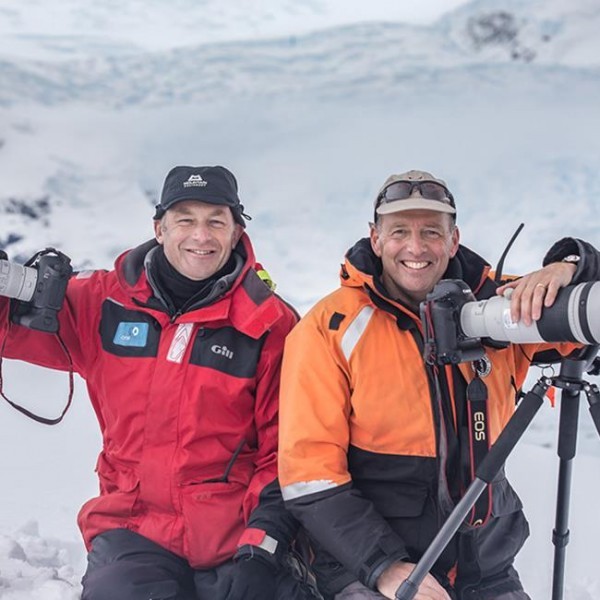 Chris Packham talks climate change, David Attenborough and all about ‘An Even Wilder Night Out’

Chris Packham is a little bit closer to home than you would imagine… After spending 18 months filming BBC’s BAFTA Award winning, Springwatch, Autumnwatch and Winterwatch, at Gloucestershire’s very own Sherbourne Park Estate last year, the wildlife expert is back in Cheltenham.

Chris Packham and Paul Goldstein are finishing their global photography expedition with their two-man show. The duo will continue their journey with an audience, illuminating their romp around the world with stories behind each masterpiece. Paul has his tigers and jaguars in Africa, while Chris tells the story behind the penguins of the Antarctic.

This time is different though, as they will also be exploring the benefits of wildlife closer to home. Now, you don’t have to go all over the globe to get beautiful images, it can be right here on your doorstep.

Chris Packham said: “We’re talking about pictures we’re taking close to home, I like to look at home, I like the smaller things, but that doesn’t mean they’re not challenging photographs or that you can’t take beautiful photographs of them.”

An Even Wilder Night Out will be their time to show their discoveries and, to uncover the underlining eco-issues – the conservation and the threats to our precious planet. They want people to do something that is eco-aware, and to build on what many others are trying to do in industry and broadcasting.  Chris acknowledged David Attenborough

Chris admires Attenborough acknowledging that this is not the first time David has been criticised about his approach, but putting forward a robust defence of 50 years in wildlife broadcasting:

“He’s done a very, very critical and important job and he’s done it brilliantly. Does he need to do it all?  He could argue there’s a team effort here, and I think it’s not all about David, I think it’s about Wildlife TV generally. It’s not just him, he doesn’t do all Wildlife TV. He can’t be blamed as an individual, that’s not fair.”

Chris’ years of effort he’s put into wildlife and nature all started from a young age, from his collections of insects expanding into reptiles.  He is now actively campaigning and pushing and cajoling the government to invest in renewable energies. Chris recognises his responsibility as the voice for a greener world: “If you have a voice, you have a duty to use that voice for positive change.” The naturalist said we’ve had a “very stern warning” from scientists and now it’s up to us to take the lead by at least changing the little things in your lifestyle. “It’s just about changing habit and I’ll say, if you don’t change your mind, you won’t change anything, and this is a time where we need to change our minds.”

“It’s easy to say we should be pushing the government to think more sensibly and urgently about this. We should also be doing things ourselves. If we all shifted and said ok, we’re only going to take energy which is being produced by renewables. If we all did it, there’d be a lot of these companies seriously worried about the loss of their customers, very keen to invest in renewables. We should lose our excess consumption, actively use car share, public transport - we say all of these things, but don’t actually do them!”

Recently with the rise of zero waste shops and a growing pressure to change our lifestyles and opt for sustainable and organic foods, there is debate that this change is targeted at those who have the money for this worthy lifestyle – can we all afford to this? Chris, who explains that he hasn’t eaten meat for 35 years at least, says it’s the little changes that add up, and cutting down on meat will actually, save you money.

“The key thing is to not ask people to make these dramatic changes. You don’t have to be 100 per cent vegan, but even if you eat meat 7 days a week and then cut down to 5, you’re making a difference.”

True to himself, Chris promised to be vegan from January next year, he said: “Shop for better quality, home produced meat, don’t buy stuff that’s imported, buy stuff from the UK market. Pay slightly more for it but eat a bit less of it. That keeps our meat farmers in business, helps the environment, sends out the message that we’re going to be eating less meat. The farmers win, we win, our house wins, the NHS wins, the world wins.”

In closing, Chris has a real conscience and ethic to do and try his best, and deliver at the top of his profession.  If that wasn’t enough, alongside the wildlife work Chris is also very active in his support for improving the lot of sufferers of autism in the UK – in conversation he is as passionate on this subject too!  A true force of nature, and he should know!

You can see An Even Wilder Night Out with Chris Packham & Paul Goldstein at Cheltenham Town Hall on Tuesday 20th November. More information via the link below