First the sad news. Into The Punset is the farewell tour of UK-based Canadian gag master Stewart Francis. The great news is that he’s promising to go out with a show that proves he’s at the peak of his punchline-making powers. “For me, it’s a happy conclusion as I’ve left the best til last. I’m thrilled to bits with what I have and it’s nice to go out on a high, like when the athlete that throws the winning touchdown in the Super Bowl then retires.”

Stewart can be confident that he has a farewell show that will be remembered fondly as he’s been trying it out on the folks back home. “I’ve been doing it in Canada, my home and native land, where I got to workshop it and get it into my brain. I write solely for British audiences, so I was doing jokes there that I knew full well the Canadian audiences wouldn’t really appreciate. But I had fun with it by stepping back from the joke to tell them what I’m going for in it and when I repeated it, that would generally be a nice moment. There’d be some sarcastic laughs . . . but what are drunks like?”

Having arrived in the UK over a decade ago, Stewart Francis has cultivated a strong following among critics and audiences, aided by TV appearances on the likes of Mock The Week and Live At The Apollo, but fully consolidated by joke-heavy live shows such as Tour De Francis, Pun Gent and Outstanding In His Field. And at the Edinburgh Festival of 2012, he won the Dave Joke Of The Fringe Award for this perky one-liner: “You know who really gives kids a bad name? Posh and Becks.”

“From my perspective, British and Irish audiences are so comedy savvy, so I don’t have to pull a big cheesy smile after every punchline to let you know that the joke’s over and you can now feel free to laugh. With my dry, deadpan humour, I can just leave it out there and the audience will connect the dots.”

Stewart admits to feeling no extra pressure to make Into The Punset an extra-special one, and his joke-writing process for this show hasn’t changed. “I just come up with the gags as and when. I’ve got the template for the show down, so as I come up with a new gag I try to work out how I can put it in there. But for me, if it ain’t broke don’t fix it, and that’s how I can carry on with my day without being obsessed with writing jokes. I just feel the sunshine on my cheeks and if I come up with a gag, all the better.”

The big question, then, is what comes next for Stewart Francis? “I’m going to step away from comedy and focus on acting which is another passion. When you’re a comedian, casting directors can be a bit lazy and think, ‘well he’s just a comedian’ but I’m not. I think I have some significant acting chops and I want to prove that to myself and to the world. But when you’re wearing both hats as a comedian and an actor, you can be taken less seriously; so I want there to be a real separation.”

So, anyone thinking that this ‘farewell tour’ could be one of those fake finales which some bands have announced down the years only to return and tread some more boards shortly after, you’ll have to take Stewart on his word. “I saw Simply Red’s last show at the O2 three years ago and they came back out a year later! I have way too much respect for the audience to do something like that. People don’t know me well enough to know how much I value the crowd and how much I appreciate their time. Even if I did want to come back, I wouldn’t do it, I’d get a job doing what I needed to do, because I try to be a man of my word. Sadly we live in a world where there’s all this cynicism and some people might believe that it’s just a publicity thing. It’s not. Andy Kaufman is dead, he’s not coming back, and this is my last tour.”

To date, Stewart’s acting CV features the likes of Canadian comedy An American In Canada, US legal drama Kevin Hill, and British sitcom Not Going Out, but is there a particular type of role he’s on the lookout for? “I love my fellow Canadian Will Arnett, he gets the most wonderful parts. But I’ve been watching The Assassination Of Gianni Versace recently and I’d love a part like Darren Criss has on there. That would be juicy. Honestly, I want to be the Disco Killer. I can do the eyes so I’m good to go.”

While Stewart Francis is currently focussing on making Into The Punset the best show he can possibly do, he will soon have half an eye on new horizons. Those who have lapped up his pinsharp brand of quickfire puns, gags and punchlines over the last ten years might feel a pang of regret that they won’t be able to see him on stage in the future, but he has some words of comfort for them. “This tour is a love letter to the UK and Ireland, thanking them for a wonderful chapter in my comedy career. It’s not a sad moment for me, it’s just all about new challenges and new horizons.” 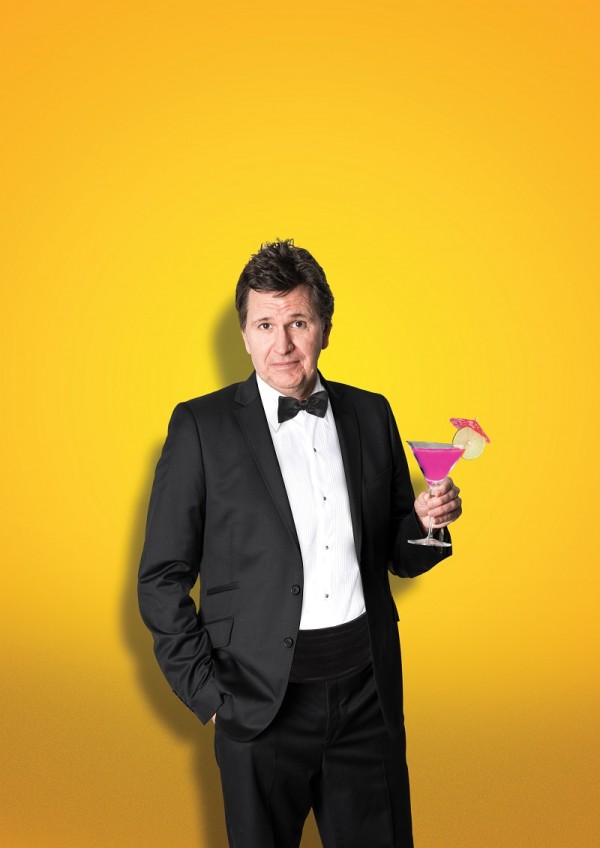