REVIEW: “A Woman of No Importance” at The Everyman Theatre, Cheltenham

A review of Classic Spring Theatre Company’s performance of
“A Woman of No Importance”
Written by Oscar Wilde, directed by Dominic Dromgoole

Saturday 7th September 2019 at 2:00pm at The Everyman Theatre, Cheltenham 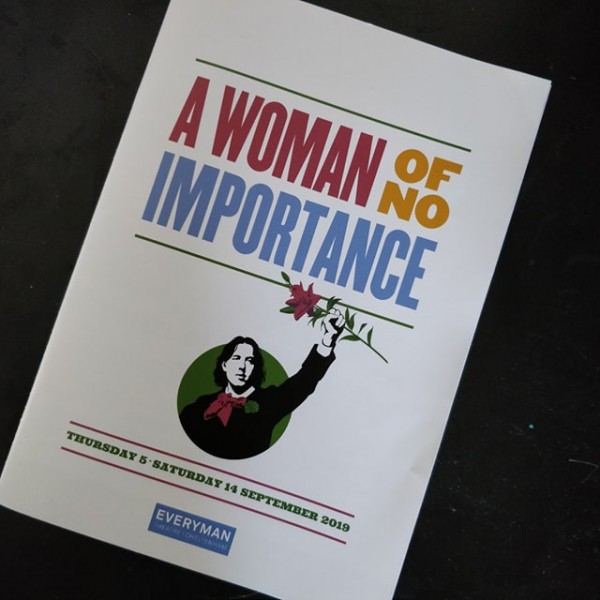 Those who are familiar Oscar Wilde will know that, of his nine plays, his fame rests most on his comedies; and this production of “A Woman of No Importance” by the recently formed Classic Spring Theatre Company has made it easy to see why.

The play opens with a party of lords and ladies at Hunstanton Chase. At the young Gerald Arbuthnot’s exciting news that he has been made Lord Illingworth’s secretary, Lady Hunstanton invites his mother, Mrs Arbuthnot to join the party. When Mrs Arbuthnot enters however, it is revealed to the audience that she and Lord Illingworth were former lovers, and Lord Illingworth is Gerald’s father. What follows is a satirical and sometimes poignant representation of the roles and expectations of the women in Victorian society – and a story which still resonates with audiences today. 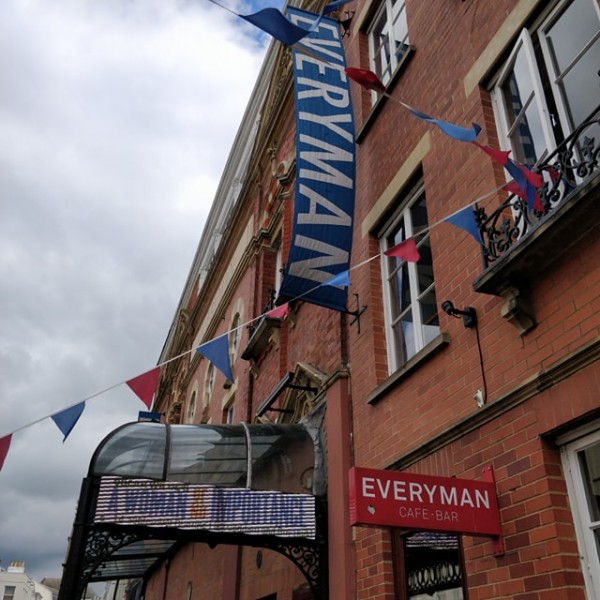 To begin, the acting in this production was wonderfully strong. Most notable performances were given by Mark Meadows as Lord Illingworth, and Emma Amos as Mrs Allonby. Mark Meadows’ Lord Illingworth exuded charm that deceptively enticed admiration from the audience (including myself, knowing the play), and audible dislike as his true character came forth in the final act. Emma Amos brilliantly captured the quick wit and allure of Mrs Allonby, delivering her speech on “The Ideal Man” with real flare. The chemistry between these two characters was notable too, and well contrasted by the innocent, youthful, and coy portrayals of attraction between characters Gerald Arbuthnot and Miss Hester Worsley, played by Tim Gibson and Georgia Landers. Kate Stephens is also to be commended in her role of Mrs Arbuthnot, delivering her longer soliloquys in particular with a clarity and variation that kept the audience engaged throughout.

Though some roles in the play are notably smaller than others, their actors nonetheless made their presence known. Liza Goddard played a charismatically forgetful and chatty Lady Hunstanton, and Roy Hudd an endearing and thoroughly entertaining Reverend Daubeny. John Bett played an infinitely endearing Sir John Pontefract, giving the audience much delight in his slow and doddery presence and evident distain for his wife, the gossipy Mrs Caroline Pontefract - performed equally as humorously by Isla Blair. Meg Coombs carried off a very believable performance as Lady Stutfield, effectively portraying the character’s anxiety to be well liked by the others through her demeanour and speech whilst bringing a wealth of characterful facial expressions to the table. Paul Rider’s Kelvil was light and comical, as was Will Kelly’s drunken Lord Alfred Rufford, and Rachel Essex and Tom Jude performed exceedingly well in their serving roles as Alice and Francis.

As an ensemble, the cast performed exceptionally together, keeping their characters relationships consistent and believable, and each speaking with clear diction and in a way that made Oscar Wilde’s language easily accessible. My only criticism of the acting was that there were moments of the play where I felt the poignancy of the subject matter/vividness of Oscar Wilde’s writing warranted greater expression than was given. However, this did not impact significantly on the overall high quality of the performance.

Dominic Dromgoole exceeded in his direction, ensuring the actors were at ease in their places on stage; no part of the space was left unused, which emphasised the grandeur of the settings, as well as the characters’ relationships with one another. Movements were sleek and well-planned, and there were little to no incidences of the cast blocking each other from the audiences’ view. Interestingly, there were moments where actors performed facing upstage, but these were well managed by the reactions of the other actors. There were some moments that I feel may have benefited from longer natural pauses, either for comedic timing, or to allow the clarity of a hard-hitting/poignant line or speech to settle. 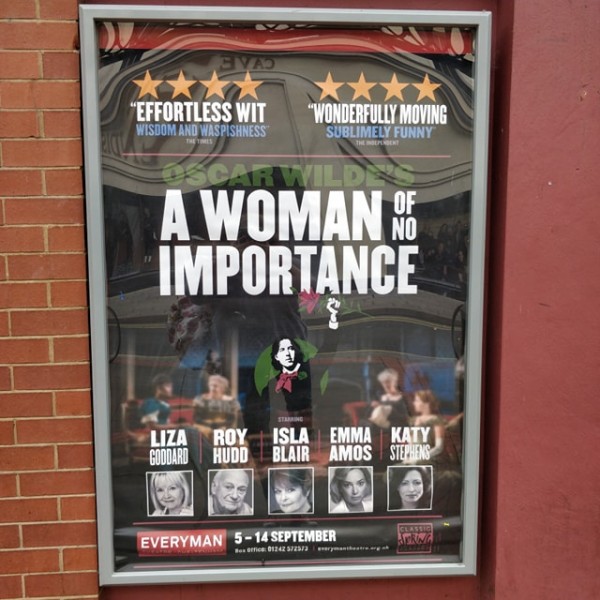 The costume and set – designed by Jonathan Fensom – was a real treat, blending and contrasting these visual elements whilst keeping them period and character appropriate. The sets, consisting of the terrace at Hunstanton Chase, the drawing room at Hunstanton Chase, and the sitting room at Mrs Arbuthnot’s house, were created with the most achievable realism I have seen yet in a staged play; from their height to their depth, and the furniture and decorations that embellished them. There was only one unfortunate break in this, where one of the actors (albeit in character) leant against one of the stage wings as though it were an additional wall. I was particularly struck by the drawing room set and costumes, in which most of the ladies were dressed in reddish-orange and green hues that blended with their affluent surroundings, while Mrs Arbuthnot and Miss Hester Worsley, as the outsiders of the group, were dressed in a contrasting black and blue. Make-up was equally appropriate, giving Mrs Arbuthnot and Miss Hester Worsley a more natural appearance, while the other ladies were more prominently made-up throughout. Hair and wigs were equally well done (although Mrs Arbuthnot’s hairstyle in the final scene appeared a little out-of-period). Props, including different drinking sets, working cigarettes, and lit candles in candelabras and lanterns served to add more impressive realism and movement to the production (although some of the hung-up lanterns admittedly looked a little fragile).

Stage lighting was also beautifully crafted throughout; it was warm and natural in the first act to depict a sunny afternoon, a shade darker but still warm to depict the drawing room of Act 2 – I almost felt as if the characters were being bathed by a warm fire from the front of the stage. Back out on the terrace for Act 3 was particularly striking – a lovely deep blue to envelop the night-time setting, but still leaving the characters visible, and giving a sense of cool evening, though the physical temperature of the theatre hadn’t changed. The sitting room at Lady Arbuthnot’s home was also appropriately lit; however, although the scene took place in the late morning going into early afternoon, the lighting beyond the French windows implied either a very early morning or late evening with a pink sunrise/sunset; it would have perhaps been more accurate to have the light brighten as time went past to more accurately depict the passage of time.

The sound effects and music in the production additionally added to the atmosphere. The use of garden birdsong and later added piano playing throughout the auditorium upon first entrance had an instantaneously calming yet intriguing effect on the audience, as well as setting the scene before the curtains went up. Unfortunately, there was an underlying electrical buzz coming through the speakers in this part, which somewhat reduced its impact. Sounds were similarly and more successfully used throughout other scenes, such as chirping crickets in the outdoor evening of Act 3, and the sound of a violin in minor coming from the indicated direction of the “music room” in Act 2, which added an appropriately anxious tone to the moment it accompanied.

Due to the vast scale of the set and costumes, I was curious as to how the time between set changes would be covered. In this instance, the audience were delighted with light-hearted musical interludes, wonderfully arranged by Jason Carr and performed through Roy Hudd’s delightful sprechgesang and the skilful playing of musical instruments by other members of the cast. The audience were encouraged to sing along to the choruses of the first song, which was thoroughly enjoyable to hear, and which further boosted the atmosphere.

To conclude, this performance of Classic Spring Theatre Company’s production of “A Woman of No Importance” was sleek, endearing, and wonderfully funny, interjected with thought-provoking sentiments and moments of poignance, and encased in a visually and aurally atmospheric setting.  The audience were thoroughly engaged throughout, applauded and cheered enthusiastically during the curtain call, and talked highly of it at its conclusion. From their enjoyment and my own, I would thoroughly recommend making the trip to see this production before it moves on! 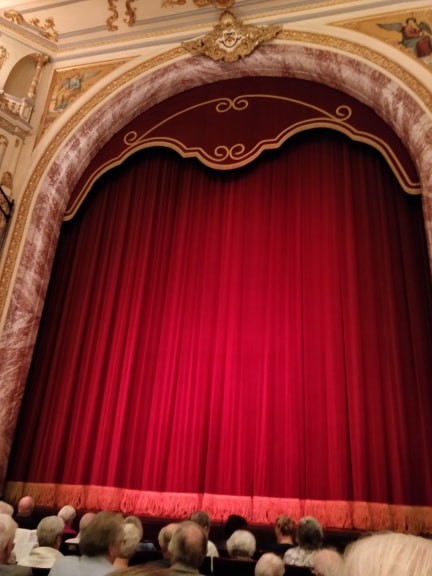