Newsnight presenter Emily Maitlis revealed the difficulties journalists faced these days getting a straight answer from politicians, at her sold out Literature Festival appearance. In a frank interview with Times deputy editor Emma Tucker, Maitlis talked of the back stories behind every interview and the compromises made, many of which made for difficult listening.

“A lot of the things that are said to us on camera, on air, are not particularly believed and quite often not true. It’s an extraordinary position to be in as a journalist. In an example, she mentioned one politician she interviewed saying there would no absolutely problem getting Theresa May’s Brexit deal through parliament, yet after the camera was turned off, they admitted it would probably be defeated by at least 80 votes.  “Three seconds. That was just three seconds later!”

Maitlis was in Cheltenham to talk about her book Airhead: The Imperfect Art of Making News, taking readers behind the scenes of programme like Newsnight, and why things rarely go to plan.

When asked which one question she would ask Boris Johnson if given the opportunity, her reply brought laughter. “I don’t think it matters what question you ask Boris Johnson really. In fact, it’s always a question of whether you can even get a politician to actually answer a one. Quite a lot of stuff that is said to us on air is not true or believable. Off record true, on record not true.”

She spoke of reporting in Hungary during the height of the immigrant crisis, interviewing the Dalai Lama, who she likened to Yoda with his funny little laugh and quirky answers to her questions, and spending two days touring Rajasthan with Bill Clinton, who she noticed in a gift shop at an Indian palace, pick up and study a copy of the Karma Sutra.

She could talk the hind leg off a donkey but all of it was lit fest gold and she held the audience in the palm of her hand. It wasn’t all serious, political stuff though. Towards the end, when Emma Tucker asked her about whether she still got criticism from viewers about things like the clothes she wore on air, she said bright colours were now off the table since new fuchsia-coloured sofas had been ordered for Newsnight. “It’s black, white or navy from now on. It makes life a lot simpler when you can’t clash with a fuchsia sofa!” 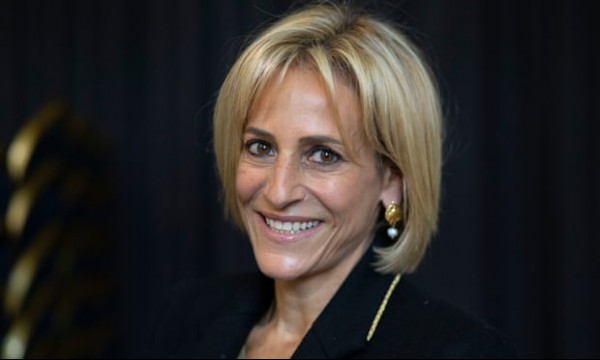