Using honeycomb and meringue, scientist and Bake Off finalist Andrew Smyth demonstrated how space craft can be stronger and less susceptible to damage while orbiting planet Earth. 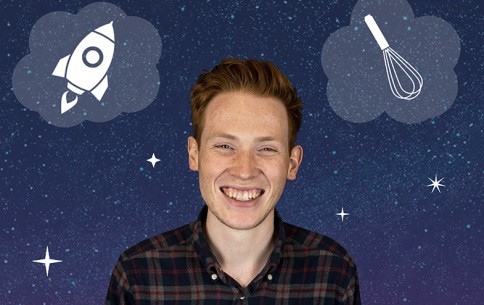 While the aerospace engineering graduate rustled up his confectionary live on stage, he kept up a running commentary that was funny and fascinating in equal measure.

He showed how the structure of honeycomb was similar to the way scientists prevent space stations being damaged by space debris, using  kind of metal foam that is 10 times stronger than steel but only 5% as dense.

Apparently, there are half a million bits of debris currently in orbit around our planet, a lot of it left by mankind as a result of their forays into space, and if a piece of it even the size of a mere marble were to hit the space station, it would cause a lot of damage.

“These pieces are travelling 17,000mph, which means if they hit the space station, it would be like a car going at 80mph crashing into it and that’s going to cause some serious damage,” he said.

He also assembled a baked Alaska, coating the outside in Swiss meringue to demonstrate how, like meringue insulating the ice cream inside the dessert, air resistance acts like a cushion to shield spacecraft re-entering the Earth’s atmosphere.

This clever and likeable Northern Irish chap, who was one of the Great British Bake-Off’s most popular contestants, is a natural comedian, appealing to all ages with his layman’s presentation of science facts and figures.

His patter didn’t falter, even when the close-up camera stopped working for a while, bringing festival staff running from all corners of the auditorium to help fix it.

Later he chopped up the honeycomb and handed it out, with spoonfuls of the baked Alaska and mini meringues to the audience. There is nothing more satisfying than watching honeycomb foam up after adding bicarbonate of soda to melted sugar, apart from perhaps, eating it afterwards.