What a great show! Walking out of the Everyman Theatre after Selladoor’s first night performance of Green Day’s American Idiot, I was humming along to my favourite Green Day song – and so was everyone else around me. You don’t have to know and love the music of Green Day, but if you do, you’ll enjoy this show all the more – this was a real blast of nostalgia for everyone living through the 1990s and 2000s! 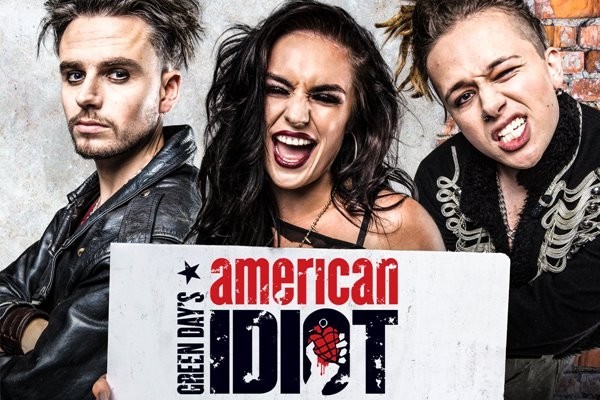 The music kicks off the show from start to finish, and I have to give credit to the sound guys and gals for getting it so right – a crisp, clear sound produced with punchy volume, made for an enjoyable punk-rock romp. Special mention must go to all the band members on stage who gave it their all and really rocked out, while keeping it tight: Robert Wicks, Chris George, Nick Kent and Charlie Maguire – great job!

Also loved the choreography and stage-ideas used as the songs played on, my own favourite being where they’re taking a bus ride to the song of ‘Holiday’. Loved that. Great use of a television in a couple of the songs, and to show other iconic moments of history. There were also some pretty gritty and emotional places the main character Johnny, played by Tom Milner, drew us into. I, for one, totally believed a scene where he clenched a razor blade in his hand, causing a lot of blood to be daubed on a nearby wall. Luckily, it was just some trick and Tom didn’t really have to slice his hand open for his art - I hope!

Quality stuff from start to finish, and at about the right length at 2 hours, including a pleasant 20-minute intermission. This was a high-octane performance by professionals who seemed to enjoy what they were doing every bit as much as we did, watching them. Thoroughly recommended for all you punk-rockers out there as I leave you with the words the multi-talented cast all sang and played along to at the end - to a theatre standing, swinging and singing along with them: “It’s something unpredictable, but in the end it’s right, I hope you had the time of your life!”

More details about REVIEW: American Idiot at the Everyman Theatre